Fabricated Sterling.  Just over an inch in diameter and weighs 3/4 of a troy oz.

Earlier this week I harvested some wild tobacco seeds.  It put the holders in my mind (see the post from June 21 for two other tobacco seed holders).

Some background regarding the tobacco seed holders:  Wild tobacco is considered by many people a very special plant.  I learned some years ago when working with the Comanche and Pawnee nations that “God enjoys the smell of wild tobacco and draws near when it is being burned in ceremony.”  I was told that in the languages of these people (and many others, by the way), the meaning of the English words “life,” “breath,” and “spirit” are all contained in a single word.  In this understanding, one “breathes” in the tobacco smoke where it becomes mixed with his or her “life.”  Then it is exhaled, as visible life/breath/spirit, and God, drawing near, breathes it in where it becomes mixed with his life–a kind of sacramental interaction. I was also taught that tobacco has its place when used properly, but it is often misused by those who don’t understand that place.  As you consider these ideas, you may recall the biblical notion that a burned offering could be described as a “pleasing aroma” (“Then Noah…offered burnt offerings on the altar.  And when the LORD smelled the pleasing aroma, the LORD said in his heart, ‘I will never again curse the ground because of man.'” Genesis 8:20-21).

I was later charged with the task of perpetuating and distributing these seeds (to keep the plants growing and available in the future), and I felt they required a worthy container.  Hence the holders began.

This is my second attempt at this design.  In the next couple of days I’ll post photos of my first failed attempt.

This one shows the inside closing mechanism before the back was soldered on.  There is an inner disk which is turned using the dial-like knob on the front.  It is turned to line up the holes on the inside and outside disks which serve as a gate allowing the seeds to be added or dumped. 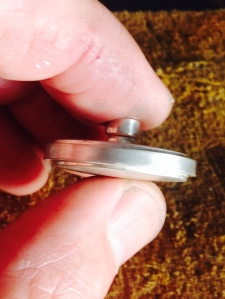 The piece is assembled here, but before the final polishing. 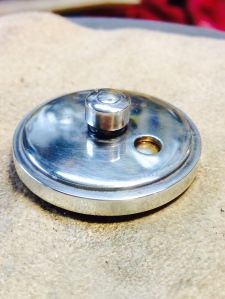 After polishing.  The gate is shown opened and closed.  The last one here shows the reverse. 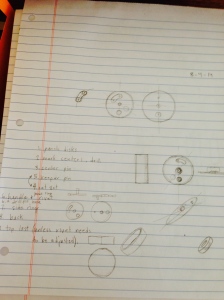 Here is my sketch for the piece.  Just before I began manufacture I decided to use a square wire for the sides rather than a taller sheet metal ring.  I think the thinner profile is much more dramatic.

This one includes the tiny tobacco seeds.